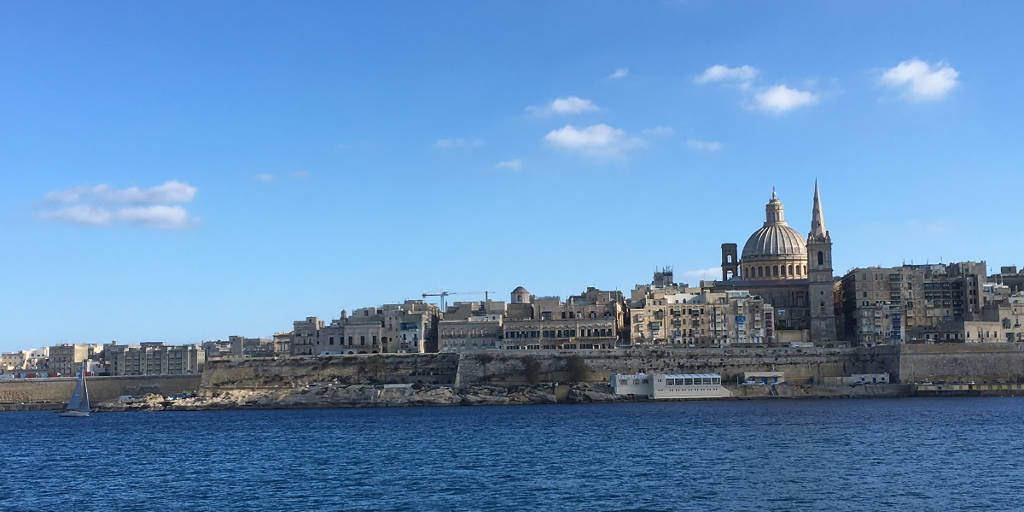 Valetta from the Sliema Ferry (Leisure Harbor Side)

I spent the week in Malta for work (my day job sends me to such horrible places, I know) and despite my intention to use the time away from my usual schedule to make progress on my story, the island had other plans. There was so much potential for latent story around me, I could not sit still.

Really, there is so much history and latent story in Malta that it would have been irresponsible of me as a storyteller to sit in the hotel cafe and type. I had to get on my feet; had to explore the architecture and history; had to drink my fill of local inspiration (and local wine).

So, rather than my usual run down of writing resources, this is the story of my discoveries. I’m not going to pretend to be an expert on any of this. I’m relying on hearsay and my week of touristing. But that’s OK because this isn’t about the real Malta. This is about Malta as a storyteller experienced it.

Because of its geography (more on that later), Malta has been a consistent target for occupation by empires. Phonecians, Romans, Arabs, various nobles from Italy and Spain, the Hospitallers of the Crusades (coming from all manner of European nations), Napoleon, and the British have all ruled here at one point or another. Each left their mark on the culture through art, architecture, urban planning, religion, diet, and language. There is all manner of juicy conflict in a history like that to shape a dozen stories.

Even the brief years of French occupation alone are inspiration for world-building. 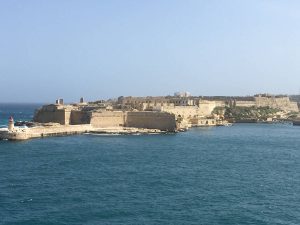 Fortress guarding the entrance to Malta’s Grand Harbor (now a movie studio). Good defense toward the sea, not so much toward the harbor.

Napoleon came through Malta on his way to invade Egypt (and we all know how well that went, right?). Valetta, the capital of the island and home to the best harbor was (still is) heavily defended by fortifications on every available spit of land. Rather than fight his way in, Napoleon “came in peace” to restock his ships, then turned his guns on the fortifications only after he was inside the harbor.
The Knights of St. John, then rulers of the island, hadn’t thought to defend that direction. They lost.

Napoleon stayed for a week and set up a whole new government, revised practically all the social institutions, looted a few churches, and left, on to break the nose of the sphinx and then lose his army.

Within two years, the French were out. The local Maltese, who had borne all manner of invaders over the years couldn’t stomach the French’s habit of pillaging churches. So they called up the British and volunteered to become a colony if the British Navy would rid them of their French infestation. Napoleon was no longer in a position to come to the island’s aid and his garrison fell.
I found it particularly interesting that the Catholic Maltese sought the aid of a Protestant power to drive out fellow Catholic enemies who had primarily pissed them off on a religious basis.

Geography and Latent Story in Malta

Until the Knights of St. John came, the main city on Malta was landlocked in the center of the island

I mentioned the island’s strategic location earlier. But the geography had other interesting influences on the history and culture.

Despite being surrounded by nothing but ocean as far as the eye can see, Malta has little fishing to speak of. The Mediterranean is apparently lousy for fishing. So the diet is heavy on grains and, traditionally, on rabbit. Not necessarily something you would expect when you can stand anywhere in the country and see the sea.

Writing a story about an island with no fish in fiction, though, might be difficult. I can write a story with wizards and dragons and nobody will blink an eye. But an island without fish? Get real!
Still, I’d like to try.

There is very little rain on the island, so agriculture is difficult and wooden architecture is a symbol of wealth, while stone is commonplace. Of course, much of the stone architecture in Malta is anything but common. The lack of wood might also explain why the Maltese never became a seafaring power on their own. When I write a story about it, it will.

Unless I write about the stone ship navy. That’s another latent story: The stoneship navy on an island with no fish.

Valetta and the Harbors 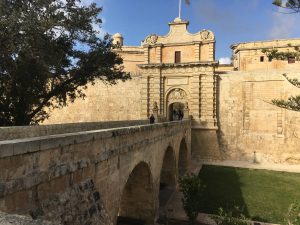 Gate to the walled city of Mdina. Although landlocked, they weren’t messing around with their defenses.

After the Knights of St. John were kicked out of the Holy Land, then out of Cyprus, then out of Rhodes, they arrived in Malta and took over the island as their base.

At the time, the capital city of Malta was the walled city of Mdina (apparently Arabic for “the city”) in the center of the island. Landlocked, despite the fact that in the area now called Valetta, the island boasted a set of natural harbors what would have been the envy of any Navy. They are currently occupied by the Yachting Navy of Europe’s wealthy, but I digress.

It still shocks me that an island country with such effective harbors, in the middle of the Mediterranean wasn’t using them. Despite the fact that the island had been conquered repeatedly by seafaring empires. You’d think one of those empires would have set up shop in the best, protected area for their boats. The Knights were the first ones to figure that out. 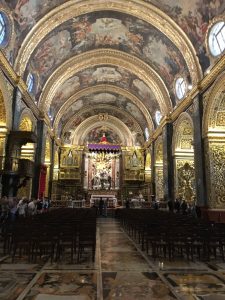 The Co-Cathedral of St. John looks plain from the outside. All the wealth went into the interior – where only the knights could enjoy it.

They settled on the Three Cities, spits of land protruding into what is now the Grand Harbor. These cities, like Mdina of old, were built in the labyrinth style of narrow, curving, hilly roads designed to trap and confuse an invading army. (It confused us plenty on the way to dinner one night).

After narrowly defeating an Ottoman invasion, though, the Knights decided they needed more. They took the unoccupied spit of land in the middle of the two harbors, turned it into the city of Valetta, named after the modest Grandmaster at the time, and fortified the hell out of everything they could. They had the stone to get it done. Valetta and the surrounding harbors are still heavily walled and fortified, though none of the forts are actually in use anymore, of course.

The process of fortifying the island is what I found most interesting. The reasons and the order in which it happened, and how the island became a military bastion. 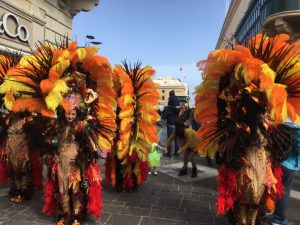 Dancers at Carnival: Risque and over-the-top celebrations born from the austerity of Lent.

I stumbled into Carnival on my first day in Malta, my first time seeing a Carnival or Mardi Gras. It is interesting to see how the upcoming austerity of Lent led to the raucous displays and ostentation of carnival. What are the unintended consequences of the institutions we create?

One of the museums I visited had a 10-hour/100 minute pocket watch from the days of the French revolution. The revolution went so far against the ancien regime as to try to change the way that time itself was measured. They, like many fantasy authors who have tried to create new and unique ways to count time, failed.

The same museum also had a chastity belt on display. It was nothing like what you see in Robin Hood Men in Tights. Not solid metal, at all, but there were strategically positioned rings of spikes.
This is why I shouldn’t leave my historical equipment research to Hollywood. Particularly not to spoofs,

I did get a little bit of writing and story work done this week.

Thanks to the 25 hours of flights and layovers to get here from Japan, I had time to finish the first draft of my short story in progress. Thanks to the exhaustion and jet lag, it’s particularly bad and in need of rewriting.

Rewriting and editing are my weak points. I don’t really know what to do. It was in part to force myself to learn that process that I decided to write short stories. So, right now, I am at the intersection of dread and excitement as I tackle the unknown. According to The War of Art, which I finished on the plane, that’s exactly what I should be feeling. Being afraid of what comes next is a sign that it is worth doing.

I have believed that for years, but it was good to hear a professional author say the same thing so I know I’m not crazy. (Or that I’m crazy in the right ways).

That’s my story for the week. Here are my favorite resources, and more obligatory Malta photos:

The War of Art, Steven Pressfield

As I mentioned above, I finished this book on my flight to Malta. I loved the first two sections on resistance and overcoming it. The last section had a bit too many religious references for me to be completely comfortable with it. But I do believe in the Muse (as with any other supernatural force, I believe in it in the sense of being a part inside of us that we can draw on), so I can deal with that.

Regardless of your religious beliefs. If you want a book to inspire you to do the most important thing a writer can do (The Work), then this is essential reading.

A VERY GOOD LIST OF VITAL WRITING ADVICE — DO NOT IGNORE!

I like to take all writing advice with a grain of salt. Chuck apparently likes to include the salt when he gives it. There are some very essential tips in here, like “Finish what you start,” and others that are there just to remind you not to take advice too seriously, like “Kill writers and eat their brains.”

As with anything Chuck Wendig, profanity warning.

Don’t sit around reading writing advice blogs, when there is wonder and latent story around you, ready for the taking.